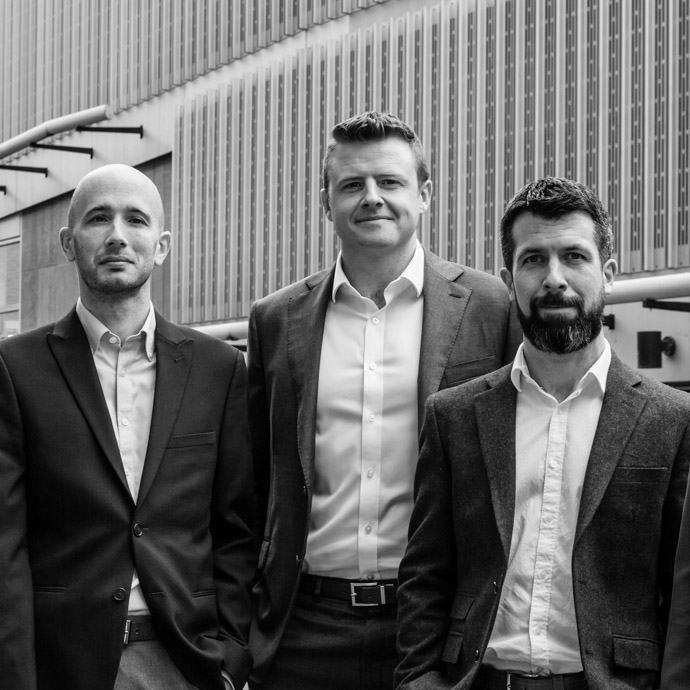 Cullen Payne Architects have announced a number of management appointments. These appointments recognise the outstanding individual contributions of the personnel involved, and gives increased involvement in the management and strategic development of the practice to a young and dynamic management team.

Darran Egan has taken up a Director role at Cullen Payne Architects. Darran became an Associate Director in 2015, having previously been an Associate of the practice since 2008.

Darran has managed a wide range of increasingly complex projects since joining the practice across both public and private sectors, ranging from significant commercial projects on urban sites both in Ireland and the UK, large scale social housing projects, to specialised healthcare projects on sensitive hospital campus sites. Creative, design led and commercially minded with post graduate qualifications in Project Management, Darran leads the practice in the design of Workplace projects and our growing activities in the fields of Project Management and Client Advisory services.

Cullen Payne Architects are delighted to bring Darran’s experience, organisational abilities and motivated approach to bear on the management of the practice, and recognise his as a key role in shaping the future direction of the practice.

Shane Blighe has been appointed Associate Director at Cullen Payne Architects, having previously been an Associate of the practice since 2015.

Shane has demonstrated his ability to deliver complex projects from design to completion. He has wide experience working on a range of significant projects including large retail, residential and mixed use developments in the UK, and three large concurrent community nursing unit projects located around Ireland using large fast track construction techniques. Shane was also Project Architect for the Medtronic Customer Innovation Centre in Galway, providing research and development suites, meeting rooms and offices for the Irish headquarters of the world’s largest medical device company.

Shane is a valued member of the management team at Cullen Payne Architects, bringing a creative, dynamic and focused approach. He leads the practice implementation of BIM.

Cillian Gray has been appointed as Associate of the practice. Cillian originally joined the practice in 2007 following his graduation, but left in 2011 and relocated to Canada where he worked on a series of multi-residential and commercial projects. Cillian returned to Cullen Payne in 2017.

Cillian was Project Architect for two large community nursing units, which ran concurrently from 2007-2011. They delivered a total of 150-bed spaces using fast track construction techniques. Cillian also brings a wealth of experience gained while in Vancouver, Canada where he worked on a variety of mid- to high-rise projects through all stages of design and construction. He was Project Architect on a number of schemes, including a six storey mixed use church, residential and commercial development and a high street retail store. Cillian also worked as part of teams in delivering several high-rise residential towers in Vancouver.

More recently, Cillian has been managing more specialised healthcare projects, in particular the design of the new Emergency Department and Women’s and Children’s Hospital on the University Hospital Galway site.

Cullen Payne Architects are delighted to bring Cillian on board the management team.  Design led and quality focused, Cillian brings an experienced and valued voice to the leadership of the practice.